Welcome to part 2 of our Beginner’s Guide series. In this part, we’ll cover the basic foundation of movement (called “parkour”) in Warframe. You’ll want to practice parkour techniques in Warframe early on so they become habit. This is probably the most important part of the game for new players to learn and become comfortable with. It is common to find players with hundreds of hours in the game who struggle with movement because they developed bad habits early on, so you’ll want to avoid that if at all possible.

In Warframe, you are able to perform the following maneuvers:

As you’ll note, this is quite a lengthy list and it still doesn’t cover everything you can do. We are going to cover the bare essentials of movement that you should try learning while going through the first missions of the game.

The most common method of traversing any “tile set” (maps) in Warframe is using Bullet Jumps. Don’t be confused by the name – it’s just the term that the game uses for the maneuver. Bullet Jumps are faster than sprinting in most cases and more convenient than rolls making them the ideal maneuver. You can Bullet Jump in any direction that you are looking. That means if you look straight up, you can Bullet Jump very high into the air. However, you can jump at any angle. You’ll want to explore jumping at different angles with your Bullet Jump as this will become a critical skill for traversing most tile sets. 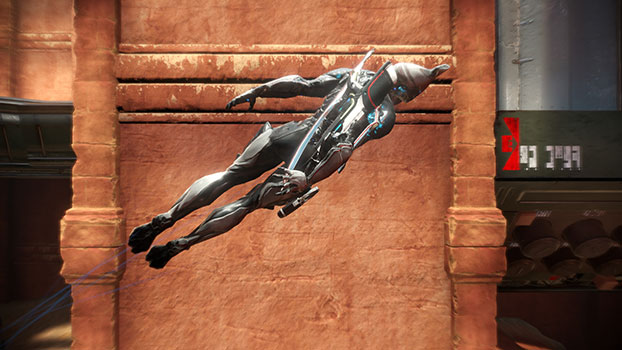 One mistake common among beginners is pausing between Bullet Jumps. You can chain Bullet Jumps endlessly without pause: They are reset anytime your Warframe touches the ground or interacts with a wall. You can also retain your momentum while Bullet Jumping by holding the W key at all times and simply turning your camera. You’ll want to get used to the rhythm of chaining Bullet Jumps seamlessly as it is the foundation of all parkour in Warframe.

There is a special maneuver not explained in the game that is far more effective if you switch your crouch key from toggle to hold: The Butt Scoot. Yes, you heard that right. The Butt Scoot is when you tap the crouch button and immediately let go (if you have it set to hold to crouch) while walking, running or falling. You will have a small boost of momentum in whichever direction you are going. You are effectively sliding for a brief moment, but aren’t giving the game enough time to switch to the sliding animation hence the speed boost. This can be quite useful when you think a Bullet Jump would be overkill for wherever you want to go.

You can travel even faster by combining maneuvers into specific sequences for increased momentum. The most common sequence is:

You’ll want to practice chaining this sequence together as it is one of the fastest ways for most Warframes to move. Double Jump and Roll both retain the momentum of the Bullet Jump, increasing your distance traveled seamlessly. The Air Slide at the end serves two purposes. The first is to assist in starting the Bullet Jump for the next sequence. The second, and more important reason, is that sliding while in the air will prevent any landing animations from high falls when you hit the ground. This helps you keep your momentum at all times.

However, the above sequence can face issues when in confined areas. You’ll often end up double jumping on top of a door ledge or on top of another obstacle which slows your momentum. In these circumstances, it’s better to ONLY Bullet Jump continuously. Try using the sequence above most of the time when you first start playing the game. You’ll quickly learn through experience when it’s impractical to use.

This is an extension of the first sequence with the only difference being the aim glide near the end (holding right click while in air). This will retain your momentum longer and cause you to fall slower, but it also reduces your overall speed. You’ll find yourself adding aim glides to your parkour frequently, however, as they will help you compensate for when you misjudge a distance or find yourself barely short of clearing an edge or obstacle.

This is an odd sequence to explain since you’ll almost never do it intentionally, but it’s worth mentioning as it can be quite useful in correcting mistakes. When you roll backwards in the air (Tap SHIFT while holding S), you’ll do a backflip and stop all forward momentum. This comes in handy if you realize in the middle of jumping that your current momentum will take you too far (e.g: past a doorway or on top of it). The Air Slide at the end of the sequence (which you’ll want to do while holding W) will give you a small boost of momentum forward. It’s not necessary to add the air slide at the end, but you’ll find it useful in most circumstances.

While there are other sequences of maneuvers you can use within Warframe to optimize your movement, the first sequence listed above is by far the most important and will allow you to travel far faster than normal. If you master Bullet Jumps and the above sequences, you will have no issues traversing any of the maps that Warframe throws your way. In the next section of our Beginner’s Guide, we’ll be discussing the Orbiter which acts as your base of operations.

How to Build a Kitgun in Fortuna