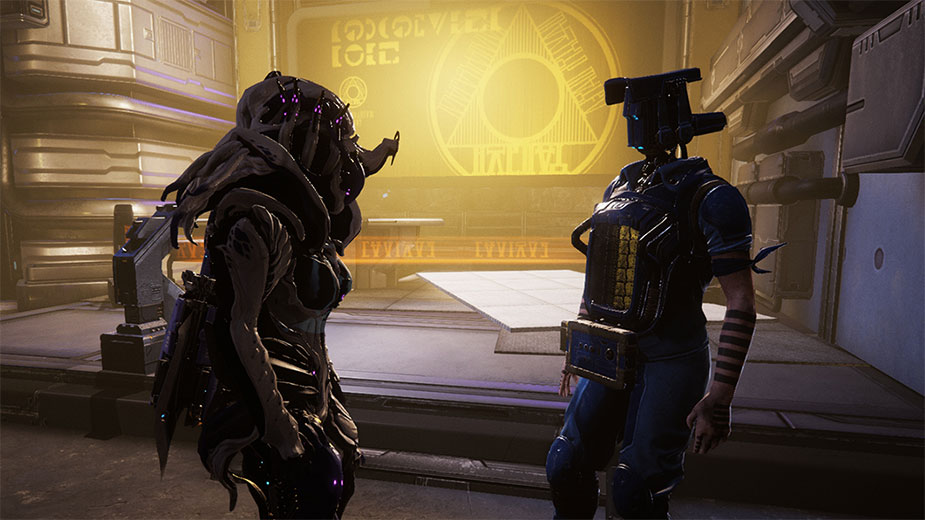 Before you can fully access all the content available in the city of Fortuna, you have to complete a quest called “Vox Solaris.” This is a simple quest that introduces you to some of the characters of Fortuna and their plight thanks to the tyranny of Nef Anyo. There are no requirements for the quest so thankfully you can jump right into it as soon as you have access to Fortuna on Venus. While Warframe and weapon choice is not too important, you might find the quest easier if you use a Warframe with decent AoE or defense capabilities such as Equinox, Saryn, Limbo, or Frost.

We have two guides for you to use: The quick guide and the full guide. The quick guide is mostly for veterans who just want to get an idea of what the quest is like and want to know what the next step is so they can finish the quest as quickly as possible. The full guide has pictures for each step along with lore and provides a little more detail on the steps provided in the quick guide. Feel free to use whichever you prefer!

To begin the quest, talk to Eudico who is located near the end of Fortuna (keep following the path from the entrance – you’ll see a large crowd of players surrounding her likely). She’ll talk about Thursby, a member of the Solaris that inherited his parents crushing debt. He’s at risk of having the dreadly “repo squads” come after him since he has nothing to his name, so Eudico sends you off to help the poor fella.

Thursby discusses his rather dire circumstances with you. After you inform him that Eudico sent you to help, he suggests stealing some supplies from the Corpus so he can stock his shop. He also briefly mentions that Eudico used to be known as Vox Solaris, the voice behind the rebellious group Solaris United. Nef Anyo attempted to identify her by presumingly torturing and “disassembling” the Solaris members of Deck 12. This silenced the “Vox Solaris” side of Eudico forever as she feared Nef’s retribution. Once you finish talking to Thursby, you’re directed to head out to the Orb Vallis for the first time.

Note: Archwing Launchers now have infinite charges and are instantaneous, so it’s highly recommended to have them on your gear wheel to traverse the Vallis!

Your first mission out on the Vallis is relatively simple: Find and loot 3 Corpus supply caches in a small area. These supply caches show up on the map if you have any loot radar and also hum similar to resource caches on Sabotage missions. You have 8 minutes to find the 3 caches so you have plenty of time to find them even if you don’t have loot radar mods. Make sure you grab the Ayatan cyan stars and other loot that comes inside the caches!

After you find all 3 Corpus caches, Thursby gets a little overzealous and spouts about how you, the Tenno, could really hit Nef where it hurts by blowing up a coolant tower. Unfortunately, he does this over an unsecured channel and a Corpus spy drone overhears his blasphemous statements. Eudico waypoints the Corpus spy drone for you which you first must take down, then defend the hacked drone from enemies. While the enemy levels for the quest are low, you shouldn’t get complacent as they can deal heavy damage if you aren’t paying attention.

Once you’ve finished defending the Drone, you’ll be asked to return to Fortuna. There you’ll find Thursby is quite happy, despite Eudico’s reprimands, as he can now start up his shop and avoid repo. At the end of his conversation with you, he’ll mention that “Biz” wants to speak with you.

The Business (‘Biz’) is vague in his initial conversation with you, mentioning the delicate balance in his life between preservation and destruction. Fortunately, you learn his intentions quickly once he sends you out onto the Vallis. He informs you that the head of the Corpus repo squad has made a hit-list for indebted Solaris. Biz wants you to take care of this repo squad leader with a friendly little K-Bomb. Eudico immediately rejects and instead wants you to take care of the situation “quietly.” Your first objective is to steal the hitlist. 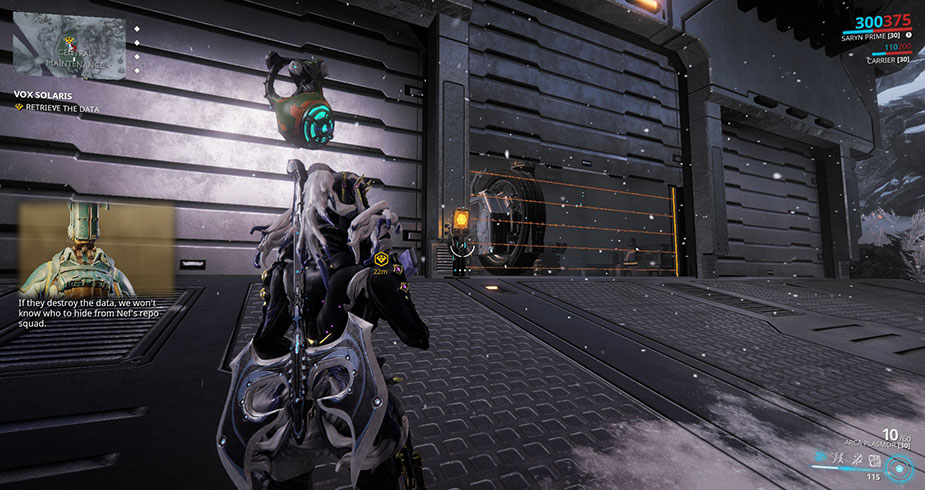 This part is straight forward – Go to the waypoint and hack your way in and retrieve the hitlist (cyphers work). Eudico scans the hitlist and finds that the repo squad is going to hit Biz’s field team today. Biz rushes you to find his field team as quickly as possible, but unfortunately you’ll find several members of the team already dead once you reach the waypoint. Biz notes that this isn’t the whole team meaning the others might be alive. Investigate 4 of the dead bodies to discover the location of the remaining field members.

The remaining members are all located in a prison block awaiting “processing” by the Corpus. Hack into the prison block terminal and you’ll begin the next section where you have to wait for the hack meter to reach 100%. You can speed this part of the mission up by killing Terra Jailers which drop data keys that expedite the hacking process. These Jailers are marked with red enemy icons and are dropped in frequently, so make sure you hunt them down! 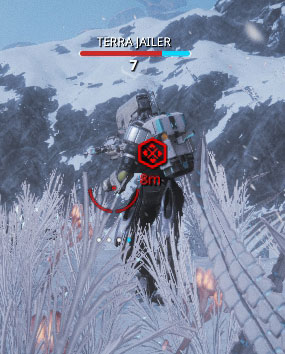 After the hacking meter reaches 100%, Nef Anyo informs you he’s aware of your actions and sends some of his repo squad after Thursby. Eudico frantically pleads for you to return to Fortuna as swiftly as possible, but it’s too late and the Corpus get to Thursby.

Once you return to Fortuna, you’ll find Eudico located in Thursby’s shop. She is frustrated that she couldn’t protect Thursby, informing you that the medics aren’t sure they can stabilize him with so much of him “missing.” She’s certain that it was a mistake to let you get involved and is now fearful of Nef’s wrath. However, she thinks it’s possible to still impress Nef before his grand unveiling of the coolant tower and wants you to help fix the “mess” you made. Off to the Vallis again!

Head back onto the lift that leads to the Vallis. Eudico will inform you that her engineers need a mineral called Amarast to counter heat cascade from the coolant tower. Biz reprimands Eudico for trying to please Nef, pointing out that no action will ever make Nef “kind.” At this point, you’re sent to an excavator on the Vallis which are extracting the Amarast mineral required for the coolant tower.

This portion of the mission is no different from any Excavation mission, but you might find it easier if you have a Warframe with decent AoE abilities. Power cell carriers are infrequent at first so don’t fret if the excavator reaches 0% power. The power cell carriers will come in larger quantities soon after you reach the excavator so just keep defending until then.

Once you’ve finished extracting the Amarast minerals, you’ll be sent over to the coolant tower. However, Nef wants to do a test run before the big presentation tomorrow and he activates the coolant tower without the Amarast. As expected, the tower does not work as intended and Nef blames the Solaris for the failure. He commands Eudico to present him with 50 workers of low efficiency for repo in an hour. 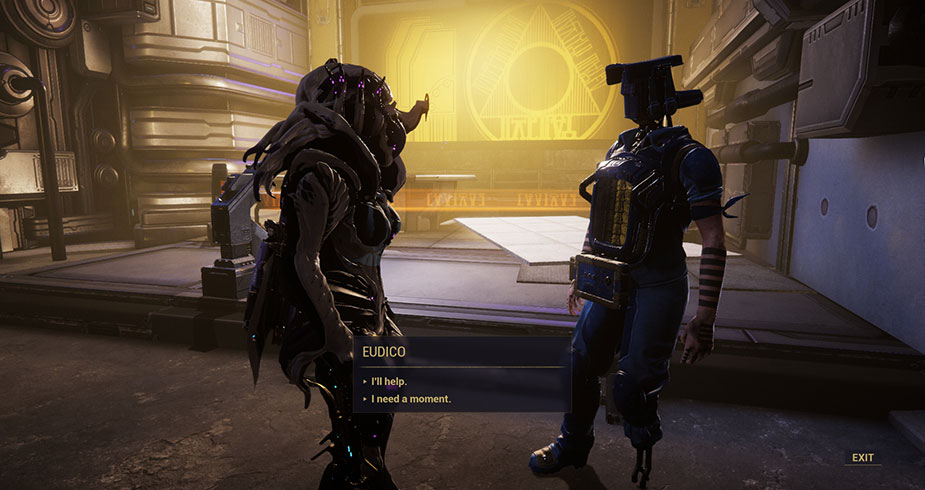 This is the last straw for Eudico who realizes the Business was right and someone must stand up against Nef Anyo. It’s time for payback! Once you decide to help, Eudico will hand you a “present” for the Corpus Taxmen before sending you back onto the Vallis. As you travel up to the Vallis in the lift, Biz is furious with Eudico before he realizes that his K-Bomb is missing. The lift doors open and you’ll find yourself greeted with dozens of Corpus and a convenient area to set off the K-Bomb in the middle of all of them. It’s slaughtering time!

As you kill countless Corpus and enjoy the sweet taste of karma, Vox Solaris (Eudico’s alter ego) begins making demands of Nef on behalf of Solaris United. While defending the gate, a huge robotic spider called a Profit-Taker Orb will start marching your way slowly. You’ll quickly find its invincible and it forces you back down into Fortuna. On the lift, Eudico and Biz have a nice heart-to-heart as they finally go back to their Solaris United roots.

Talk to Eudico and she’ll tell you she arranged a “little something” for you to deal with that “spida momma” (her words not ours). Yes, it’s time for what you’ve been waiting for: The K-Drive! Once you’re back on the Vallis, you’ll be greeted with both the Profit-Taker and a K-Drive. It’s time to live the dream of Tony Hawk Pro Skater in space!

Mount the K-Drive and rush past the Profit-Taker Orb using your boost (sprint button). If you’re like us, you’ll want to take your time getting to the objective so you can have fun figuring out this fun, whacky new vehicle! For now, just know that sprint provides you a boost and crouch let’s you grind on rails.

Make your way to the waypoint where you’ll be greeted a terminal by the coolant tower. Hack into the terminal and prepare yourself for another Defense objective. Stasis Limbo, Frost’s Snow Globe or any AoE Warframe can handle this portion of the mission with ease. As the tower overheats, Nef becomes progressively desperate and eventually acknowledges that without the Solaris, there is no Vallis. In the end, all of Nef’s precious investors desert him as they watch the system he built crumble before him. Justice has been served!

The final step is to administer the Amarast mineral to dissipate the heat cascade. The coolant tower returns to normal levels and the mission is a success! Eudico reflects that even if she wasn’t the one to bring Solaris United back, someone else would have in her stead. This is just the beginning and there’s plenty of work ahead for Solaris United. Return to Fortuna to finish the quest. Congratulations! 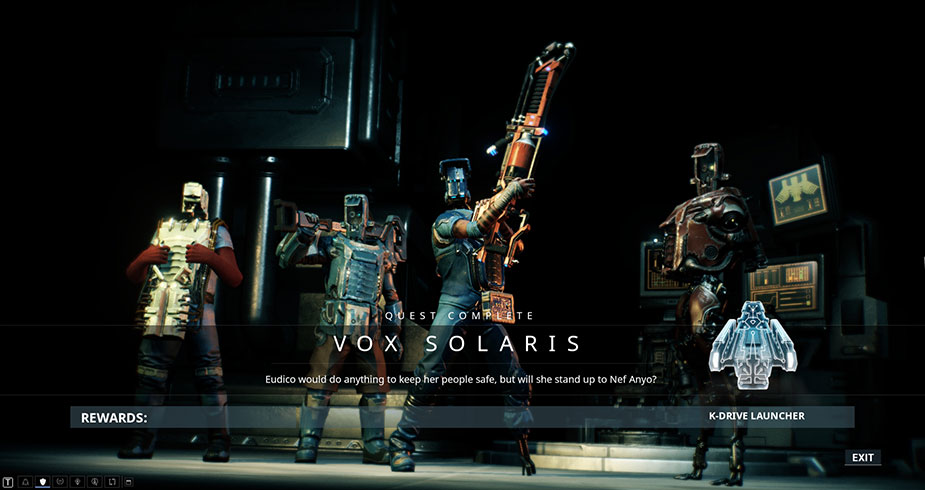 How to Farm Kuva Fast and Efficiently

How to Farm Garuda Warframe