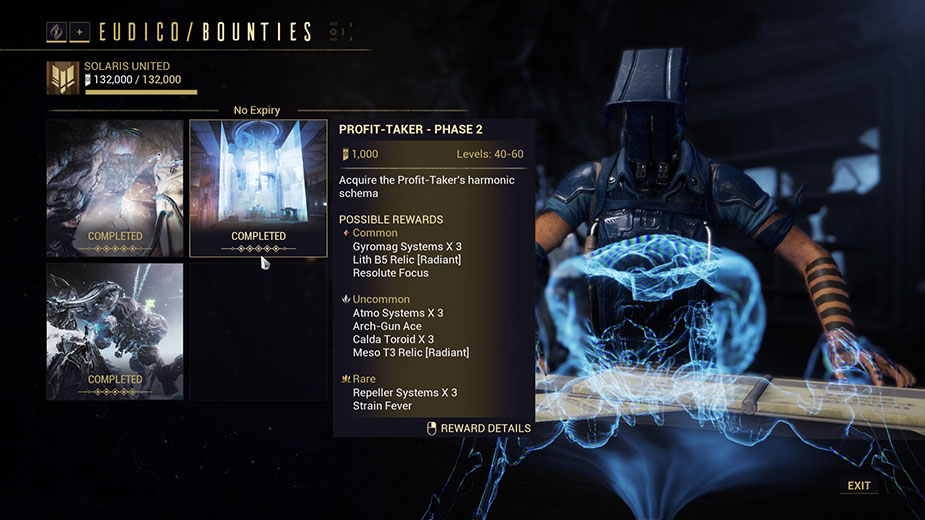 As of Update 24.2.9, you can now purchase Gyromag Systems for 1000 Vox Solaris standing, Atmo Systems for 2500 standing and Repeller systems for 5000 standing. All the information below is relevant for how to obtain these items WITHOUT spending standing.

The Profit Taker bounties are here and with them comes a few new resources that you’ll need for ranking up in Vox Solaris and for several reward blueprints. Gyromag Systems, Atmo Systems and Repeller Systems are rewards from these Profit Taker bounties which you can take on in the backroom of Fortuna. All three of these items have an equal drop chance in the first three Profit Taker phases and slightly higher chance in Phase 4:

Since the drop rates are similar for all 4 Phases, it’s best to farm the fastest Phase of them all: Phase 2.

First, it’s worth noting you cannot farm Phase 2 without first doing Phase 1. In order to accept the first Profit Taker bounty, you must have the highest rank in the Solaris United syndicate. Once you’ve done both of these, you’ll be able to farm Phase 2 as frequently as you like.

Phase 2 is an extremely short and easy Bounty that is best completed solo (unless with a quick squad). Bring along a well modded weapon as you’ll need it for taking out the Ambulas towards the end of the phase. Enter the Orb Vallis after accepting the bounty from Eudico in the back room.

This mission always infiltrates the Enrichment Labs so head over there immediately upon entering the Orb Vallis. Enter into the building and start heading into the furthest backroom (same room as Spy portions of Bounties). Since the Enrichment Labs is a bit of a maze, we recommend checking out the full video run at the start of this section if you aren’t certain about where to go.

If you’re fast enough, you’ll end up having to wait for dialogue to finish before the first Director spawns. In our testing, the directors always spawn in the exact same locations meaning you can rush from one to the next if you know their spawn locations. After doing the mission a few times, you’ll become familiar with these locations easily.

Once you’ve killed all 3 Directors, head outside the Enrichment Labs where you’ll find 2 Ambulas guarding a prison cell. These Ambulas have a sizable health pool, so we recommend bringing along a heavy damage weapon like a sniper or shotgun. Personally we’re using the Lanka, but any weapon will do as long as it hits hard. Once you’ve killed both Ambulas, grab the datamass in the prison cell they were guarding and exit to Fortuna. Bounty complete!

One last thing we should note before moving on is if you go fast enough, the dialogue won’t be able to keep up with each of the actions you’re taking. You cannot take on a new bounty while the dialogue from the last bounty is still ongoing. Simply talk to Eudico (by the entrance to Orb Vallis, not in backroom) and this should cancel out the dialogue, allowing you to take on a new Bounty.

Any well-modded Warframe or weapon is more than capable of finishing this bounty swiftly. We’ve opted to use Rhino since, as with most content in the game, he can make the mission trivial by activating Iron Skin. Roar is also an excellent buff that enables you to kill both the Directors and the Ambulas swiftly. You do not need an optimal build for any Warframe you bring along as your weapon is far more important. Also keep in mind a Speed Volt can make this mission even faster if you prefer.

In terms of weapons, we recommend bringing along any high damage sniper or shotgun so you can burst down (or one shot) the two Ambulas at the end of the mission. They are level 60 with a sizable health pool so you may not be able to one shot them without a Forma’d weapon, but you should have no issues as long as you’re using high damage mods. We use the Lanka which can one shot the Ambulas when used with Rhino’s Roar (no Riven). Any solid Maiming Strike build can also 1 hit the Ambulas if you have the option available.

We hope this quick and short guide helped you with farming Gyromag, Atmo and Repeller Systems. In addition to being required for ranking up in the Vox Solaris syndicate, these components are also used in Clan Research for the Gravimag which is needed to use Archwing weapons on the ground. Feel free to leave your thoughts in the comments below if you think there is a better method of farming these and best of luck!